Conventional, primary total hip replacement is a durable operation in majority of patients. A hip replacement is a mechanical device with parts, most commonly referred to as a “ ball and socket,” that are assembled before and during the operation. After surgery, this ball-and-socket prosthesis restores movement in the hip throughout the life-span of the prosthesis (Figure 1).

Why consider a hip revision?:

The majority of elderly patients who receive a hip replacement retain the prosthesis for 15 to 20 years, and sometimes for life. However, some patients may need one or more revisions of a hip replacement, particularly if the initial hip replacement surgery is performed at a young age and the patient chooses to have a very active physical lifestyle.

Preoperative investigations of patients who will undergo revision surgery are more extensive than those for patients who will undergo a primary surgery. Often times, special radiographic (X-ray) projections, CT scan, or MRI imaging of the hip may be necessary to determine position and fixation of the replacement parts (components), and to determine precisely the extent of bone loss around a failed implant. A preoperative aspiration (fluid sample) and/or special blood work may be needed if Dr. Della Valle suspects an infection in the failed hip.

As mentioned above, a hip replacement implant's structure resembles that of the natural hip (a ball and socket). For a hip replacement to function well, the ball must remain inside the socket at all times. Two key factors keep the ball inside the socket: (1) the alignment and fit of the ball and the socket, and (2) forces generated by the strong muscles and ligaments around the hip joint. A hip replacement is designed to have a large range of motion. However, trauma or certain hip positions can force the hip ball out of the socket. This condition is called a dislocated hip or hip dislocation (Figure 2).

Figure 2: X-ray of a dislocated total hip replacement prosthesis showing the ball forced out of the socket

Dislocations are relatively infrequent, particularly in the healthy patient who carefully follows precautions given by Dr. Della Valle and physical therapist. However, some patients are predisposed to this complication: the elderly, debilitated patients, or those who get a hip replacement after a hip fracture or after multiple hip surgeries.

Revision surgery is effective in preventing a new dislocation. Prior to surgery, Dr. Della Valle may request imaging studies to determine the exact position and orientation of the different parts of the replacement. One or more parts may need to be reoriented or completely exchanged during the revision.

In certain instances, Dr. Della Valle may use a device that “captures” the ball inside the socket (called a constrained socket). The proper healing of the soft tissues around a revised hip is most important for the success of the operation. Therefore, Dr. Della Valle may recommend wearing a brace for a few weeks after surgery. After surgery, it is important to follow Dr. Della Valle's advice and to refrain from moving the hip into positions that can generate a new dislocation.

The parts of a hip replacement which move against one another will slowly wear down during the regular use of the replacement. The younger and the more physically active the patient is, the faster the wear. Continual, repetitive movement of the mechanical parts causes small pieces of hip prosthesis ("wear particles") to break off. Depending on the type of hip replacement, these particles can be made out of plastic, cement, ceramic, or metal.

A patient’s immune system will recognize the particles as foreign (not a natural part of the body) and generate an immune response (like an allergic reaction). A strong reaction to the wear particles can result in the destruction of bone around the hip replacement (a condition called osteolysis). If the bone destruction is severe enough, the components of the replaced hip may become loose (Figure 3).

Figure 3: X-ray of a loose total hip replacement prosthesis showing separation of the stem from the bone (as detailed by arrows)

A loose component can move against the surrounding bone, compounding the bone loss. If the bone loss is severe enough, a spontaneous bone fracture can occur (known as a pathologic fracture). 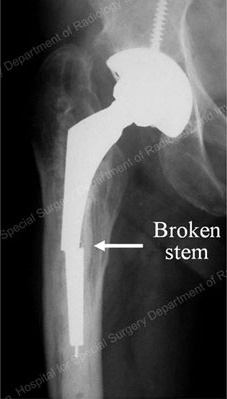 During revision surgery for wear, mechanical loosening, or breakage, Dr. Della Valle will remove the worn, loosened, or broken component(s), assess the amount of bone loss, and implant new components. Frequently, a bone graft from a deceased donor (whose tissue is tested for compatibility with the patient) is necessary to rebuild the bone content lost because of the prosthetic failure. In certain instances, when a large amount of bone graft must be utilized, or when the patient’s own bone stock is poor quality, Dr. Della Valle may ask the patient not to bear full weight on the operated leg for a specified period of time after surgery.

Infection of a hip replacement

Infection can occur at any time after surgery. The risk is higher during the first six weeks. The risk of “late” infections after that period is lower. Sometimes, infections unrelated to the hip – for example, in the mouth, gums, or teeth (including after regular dental procedures that involve bleeding gums), or in the lungs, urine, or skin – can cause bacteria to enter the blood stream. This bacteria can then seed and infect a hip replacement, causing hip pain and fever.

In the presence of a prosthetic infection, Dr. Della Valle will attempt to identify the organism (bacteria) that is causing the infection. A hip aspiration may be recommended. The liquid aspirated from the hip will be sent to a laboratory and tested to determine the type of bacteria present and the antibiotics the bacteria are sensitive (susceptible) to.

The most common treatment options include:

It is vital for a hip replacement patient to be aware of the risks of infection and implant failure, and to monitor themselves post surgery. Some of the above-mentioned forms of failure can be prevented.

The natural wear and tear of a prosthesis generally causes no pain or discomfort. Therefore, it is very important for the patient to have his or her hip replacement regularly checked. A simple physical examination and radiographs (X-rays) are necessary at intervals designated by Dr. Della Valle. If excessive wear and/or bone loss is detected at any time, close monitoring is necessary to determine the best possible time (if any) to have the hip replacement revised.

Things to keep in mind when considering revision hip surgery

During revision surgery, Dr. Della Valle may need to remove or exchange one or more parts of the hip replacement. The parts that are not attached to the bone can be safely exchanged with minimal to no removal of the patient’s bone. However, if the metallic parts is in contact with the bone, it needs to be changed. Some bone loss generally occurs. In addition, some of the musculature around the hip will be lost, thus affecting the strength of the hip and the patient’s function after surgery. The results of revision surgery are not as predictable as those of the primary surgery. Complications are more frequent.

A revision of a hip replacement is generally more challenging than the initial operation. It should not be regarded as or compared to "changing the tires on a car." The results of surgery and the durability of the revised hip replacement are less predictable than those of the primary operation. With every revision surgery, there is some loss of muscular mass, bone, or both. The duration of surgery is generally longer and the likelihood of complications higher than during the primary surgery. 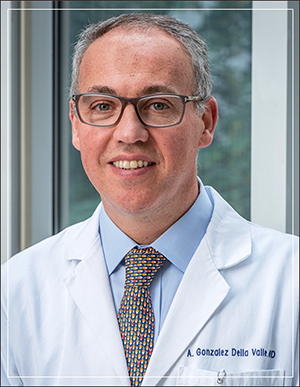 Physician & Procedure VideosDoctor In The Media